White House Down, or…

How I spent an afternoon in DC!
Disclaimer: Apologies in advance, this is a long post…but it was a long, packed day (and a bit)

Day 5 of my holiday and it started with a little bit of a panic attack. My travelling had so far been event free, which is quite rare for me. There is always some drama with tickets or dates or something random.

My time in New York was coming to a close and I had booked myself a bus ticket on a Megabus to go to DC, which was my version of a road trip. I had thought of taking a train but all the tickets were already gone when I looked online the month before (Amtrak website) and time wise, there wasn’t much difference. It cost me $33 on a pre-booked sale to do NYC to DC in 4h30. Not bad, especially considering that the bus has A/C and free wifi! Yes, that’s right, there was wifi on the bus! Eat that London Bus! Granted this was more of a coach trip than a bus, still… Now, where did the panic occur I hear you wonder…This all seems perfectly well planned, particularly that I had found out a couple days before, during one of my numerous meanderings where exactly those buses started from…well my impatient friends, the panic came as I was having my last breakfast at the Hungry Ghost. My bus was for 9.30 and I had calculated that I needed to leave by 8.30. I was awake way earlier than planned so decided I had time for breakfast. I had just finished my  last ginormous donut (went back to the coconut one which was my favourite) and catching up with my journals…I thought, let me get my ticket out to an accessible pocket and just triple check the streets where the bus departed…when I saw the departure time again…9am…wtf??? My bus left at 9am, not 9.30am??How? And then I remembered…I had been planning 9.30am for the longest time and then at the last minute, I decided that it wouldn’t be too hard to make the 9am and I would gain extra time in DC…Idiot!! (that is not the first time something like that happens to me unfortunately)…Suddenly, I didn’t have time to finish my coffee and potter around. I packed up and ran for the C train, stressing myself that it was taking too long to arrive. Finally I was in, constantly checking my watch, trying to calculate whether I would need to run for it from Penn Station stop or if I could get away with walking it…It looked ok, 3 more stops….and then the man standing next to me started shaking, stiff as a board…we just had time to catch him to break his fall. He was having an epileptic fit. Oh yes, I never had to use my first aid before and now that I was stressing about missing my bus, I finally got the opportunity?! Damn. Sorry if it sounds a little callous. I really felt sorry for the poor guy and I helped get him in the recovery position (when other people wanted a) to restrain him and b) put him flat on his back) but there is always that part of you that say “couldn’t you have had it in the train after me?”. We stayed in station for a couple of minutes. Poor dude was still fitting. The driver told us to get back, that we would get help from the next station. As I had been helping, I felt I needed to wait until someone came. Lucky for me, we stopped at a station with alternative trains and they didn’t need me. I dashed to jump on the A train (thankfully fast to Penn Station) and then ran most of the way (4 avenue blocks with bags and suitcase, thank you very much), only to discover that I had plenty of time…still, if I hadn’t run, something else probably would have happened! 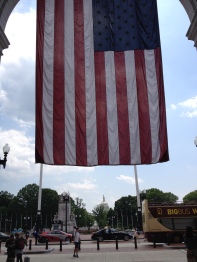 First glimpse of DC as I walked out of Union Station

The journey was completely uneventful (thankfully so) and the grey and wet of NYC was replaced by hot and baking of DC. I had booked myself in a hotel as close to Union Station as I could as a) I didn’t want to have to figure out transport and b) as I only had the afternoon and evening in DC, I didn’t want to spend most of it on the subway. I had done a search on Trivago (very useful) and found the Phoenix Park Hotel for a very reasonable rate. The hotel is literally 5 mins walk from Union station and 15 mins walk from Capitol Hill. It’s quite old fashioned but the staff was friendly and the room was clean and surprisingly quiet. The one downside was that although wifi was complementary with room rate, the signal didn’t stretch as far as the 8th floor where my room was, and the bathroom was tiny. Ok for me as I was on my own, but the room was a twin room. Then again, you don’t need to spend that much time in there. Ah, and there was no mini fridge in the room. If you are there for one night like me, no big deal but if you are there for a few days, you can keep cold drinks.

I had agreed to meet Jane there. She is a friend of the bride to be (you do remember that I was state side for a wedding, right?) and flying in straight to DC. We had organised the hen party in London together and hit it off so well that, I chose to go to DC to catch up with her so we could share the hire car together. I had just the time to drop my suitcase, freshen up and change (it was boiling hot there compared to NYC) and I was on my way to meet with her. We spent the afternoon strolling around Capitol Hill, checking all the major sites.

This area of DC is quite impressive as all the monument are huge and so white! With the sun out like that, they were positively gleaming. Unfortunately because of the time constraint, we didn’t have time to go into any of the museums and I really would have like to visit the Smithsonian, still there was plenty to see. I was very impressed by the Lincoln Memorial. It’s much bigger than I could have imagined. It was quite strange to walk around and see all those sites that I have seen in movies. Even more so than in NYC as in DC, everything is concentrated within a few kilometres. It was particularly all vivid in my head as I had just watched White House Down with the lovely Channing Tatum just before I left for New York. 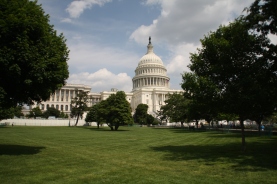 One of the Smithsonian’s building

The Capitol viewed from the Needle

The Needle aka The Washington Monument (not very original) 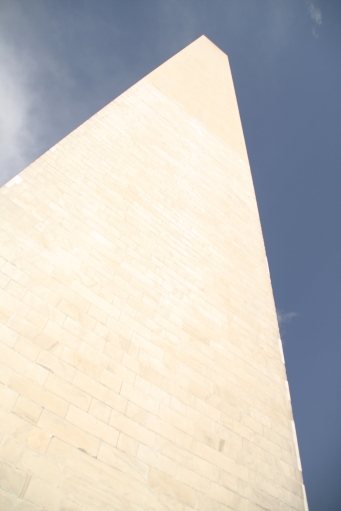 The Needle view from the bottom

The Lincoln Memorial viewed from the Needle

The White House viewed from the Needle

The Needle viewed from the Lincoln Memorial

The Needle viewed from the side of the Lincoln Memorial 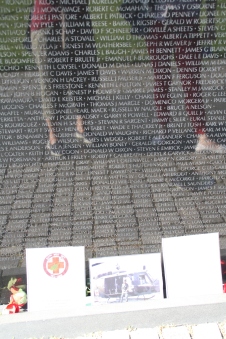 The White House from the temporary fence

The White House, zoomed in (thank god for zooms!)

We couldn’t get very close to the White House because of the upcoming Memorial Day celebrations. They had gated all around it, in preparation for some event or other. From there, we just wandered around in search for a place to have dinner, which we found in Chinatown…although we didn’t eat Chinese but Mexican 🙂 Chinatown there is a little more obvious than in NYC. 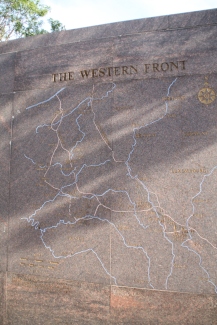 A little bit of France

The Gate to Chinatown

Jane was staying in Alexandria district so she had to take the subway back after dinner. I decided to walk back to the hotel so I could see the sights at night. Boy, that was creepy. Capitol Hill at night is pretty much like The City in London on a weekend night. Absolutely deserted. You get traffic but no pedestrians. I am guessing most of the people working there, get out to the neighbouring districts as soon as the end of day bell rings. I nearly got myself lost too as it was too dark for me to find my points of references. Thankfully, because of the Memorial Day preps, there was a policeman on duty who pointed me back to the right direction. Saying that, although it was eerily quiet, seeing those big white monuments at night was quite something too… 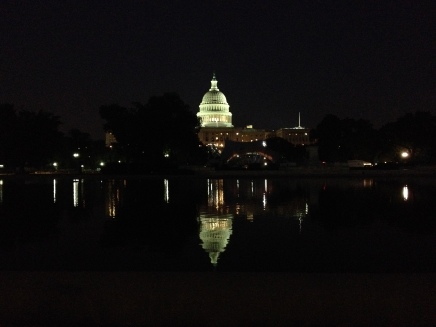 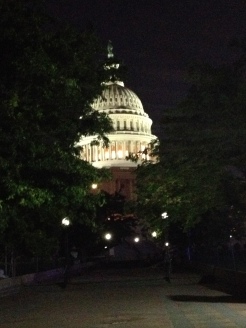 I slept surprisingly well considering I was in a hotel – I normally have fitful sleeping and the sun was already hot when I checked out, even though it was not even 9am. I was meeting with Jane at Vienna Station (end of the Orange Line) where we were going to get a cab to the car hire office at Dulles Airport. We were only due to meet at 10.30 but I wasn’t sure of the schedule of trains. I thought well, even if I am early, I can go to a coffee shop and wait for her….Big mistake. Because I was within the rush hour times, I got to Vienna by 10am, only to discover that there is absolutely nothing around there. It’s just a station, no coffee shops, no shops of any kind, not even a park…Luckily, the weather was gorgeous and I just parked myself at one of the bus stops and read my Kindle (thank god for Kindles!) and though, pah, it’s only 30 mins…or it would have been if Jane hadn’t missed her connection and was delayed by at least 30 mins! She got there eventually and after a couple of false starts – mainly due to GPS failure, we got to Pittsburgh just in time to get a beer before we had to get to the Pirates Game we were all booked in. But this, will be the subject of another post…

"Life should NOT be a journey to the grave with the intention of arriving safely in an attractive and well preserved body, but rather to skid in sideways, chocolate in one hand, martini in the other, body thoroughly used up, totally worn out and screaming WOO HOO what a ride!"
(Author: Maxine)